Carving is one of the oldest and most beautiful decoration techniques. It is most often used for decorating wood, sometimes bones or horns, and whole statues, too, are decorated with carving sometimes. You can carve objects with knives, chisels or with the two alternately, depending on the pattern.
When choosing a knife, try them by gripping them in the first place. The grip of the knife is essential because for carving you are expected to exercise force through the grip.
The design of the knife blade determines what pattern you can easily carve with it. You cannot make spiky motifs unless the tip of your knife is pointed. A pattern with narrow curves cannot be followed by a knife with too wide a blade. In practice there is a wide range of knives but it is only knives of basic shapes that are rightly available in trade. For unique motifs you need knives of special shapes that have to be manufactured to your order or that you probably have to make yourself. In olden times, shepherds in the Carpathian Mountains or the Alps were able to make beautiful works of art by carving, using a single pocketknife. Considering this I can think we, too, can make some beautiful patterns and works of art using various knives of basic shapes. 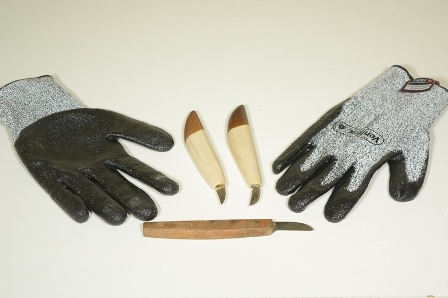 In the chapter entitled Some materials science we learned about grain direction. Let us now learn more about this topic examining how the grain direction of the wood affects a carving knife when carving a circle. 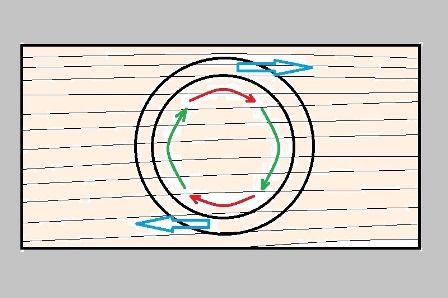 (Example for carving a circle)

The knife is able to nicely cut the wood fibres in the direction of the green arrows. However, as soon as we turn into the grain direction (red arrows), the wood fibres try to guide the knife. As a consequence, the knife automatically goes straight in the direction of the blue arrows. In this case we can make the round form a little square. At these places, you should guide the knife more slowly. In the grain direction (red arrows), the knife should be guided by less pressure than against the grain (green arrows).
With some simplification you can categorise carving patterns in two groups:
1. Chip carving
2. Relief carving
It is certainly very difficult to become a master of all carving techniques but we can set up about five categories of difficulty:
1. Plant support pole or grave pole carving
2. Chip carving of flat surfaces
3. Decorative carving of convex surfaces
4. Relief carving
5. Figurative carving
Considering the sizes of the workpieces we shall here focus on the chip carving of flat surfaces that can be done with a knife and learn the basics of the decorative carving of convex surfaces as well.
Work always with clean hands!
Before starting carving your workpiece, consider what patterns or motifs you want to decorate it with. Sometimes a flower or a few bigger patterns look nicer than a lot of tiny patterns all over the surface. When designing, drawing and carving the patterns, the grain direction of the wood should also be considered. A row of curved motifs is easier to make against the grain than with the grain direction. Grain directions sometimes change slowly, while other times suddenly, which should be kept in mind while carving.
Draw the motifs on your workpieces, together with central guiding lines, in light pencil and in a way making sure that the drawn surfaces fall out when carving. As you get more experienced later on, you can do without guiding lines, drawing in the main lines only.
In general you can say that using sandpaper should be avoided for carved workpieces. When your workpiece is finished, avoid sanding because the carved edges could be rounded and their contours and beauty could be lost. In the course of carving sanding should be avoided because the falling grains of the sandpaper make the knife blunt. If you cannot avoid sanding, do it with clean sandpaper attached to a sanding block on large surfaces. Contamination from dirty surfaces or sanding paper or lead from markings made by a lead pencil can get stuck in the carvings as is difficult to remove. Considering this avoid pressing the sandpaper hard in the beginning and as long as there is lead or contamination on its surface, remove the dust from the sandpaper regularly. If you have to do sanding in the grooves, do it very carefully.
Grip the knife as if you were cleaning potatoes. Keep your thumb free and use it for support. When pulling the knife, use the force of your fist and thumb; when guiding it in the wood, do it with your wrist.
Chip carving requires an incised carving technique, which means that it is not enough to press the knife only but the blade of the knife, too, must slide slowly in order to cut the wood fibres.
It is not necessary to finish off the pattern in one step. You can remove the woodchips piece by piece until the pattern is completed and becomes apparent.
Those who have no practice in carving should fix the workpiece to a table. If they prefer working while holding the workpiece in one hand, it is advisable to wear a cut-safe glove. 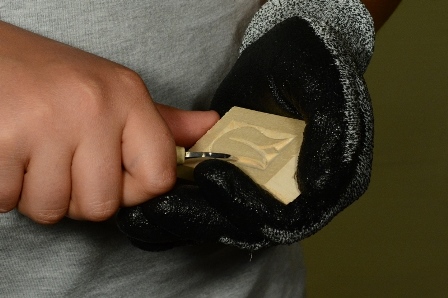 (Holding the workpiece in hand, wearing a glove)

In order to learn the beginning steps, carve a groove on the plant support pole first. 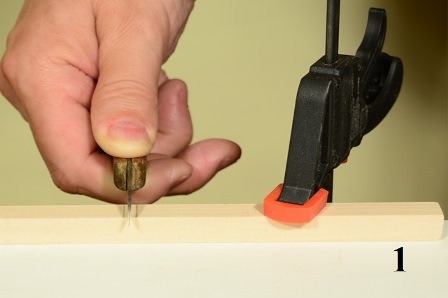 (Step 1: make a vertical cut into the wood in the middle ) 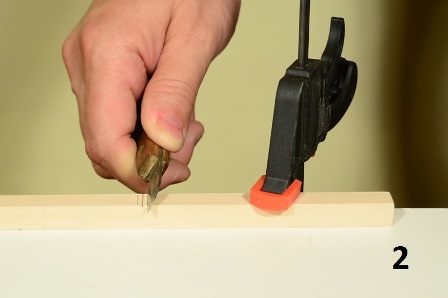 (Step 2: Cut the motif from one side) 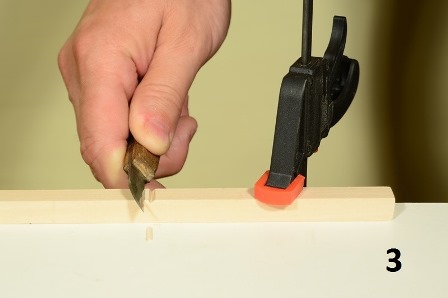 (Step 3: Cut the motif from the other side) 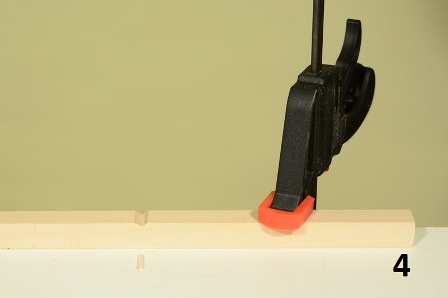 (Step 4: You have the groove ready)

As you develop a feeling for the knife already, you can take the pole in your hand and draw and carve more difficult motifs as well. 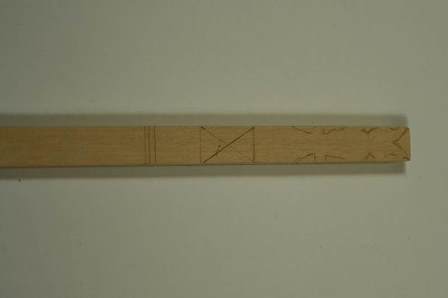 (Motifs drawn on the end of a plant support pole)

You can decorate larger surfaces like the sides of boxes, too, with chip carving: this is called the decoration of flat surfaces. These decorations usually consist of row patterns. The motifs must be cut the same way as in the case of the plant support pole. Here, too, cut the central line first, then cut the motif from the one and from the other side.
When designing your workpieces, draw the patterns on paper first or if you have drawn them by computer, print them on paper. 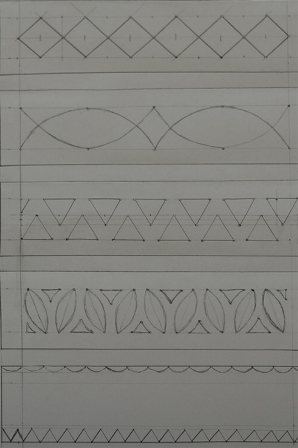 Make holes in the drawing at the decisive points of your pattern. Copy the points on the wood through the holes, using a pencil. 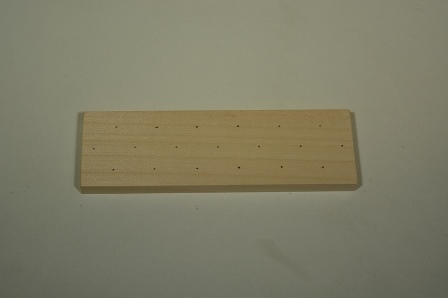 (Points copied on the wood)

As long as you are a beginner, you can even draw in the lines of the cuts. 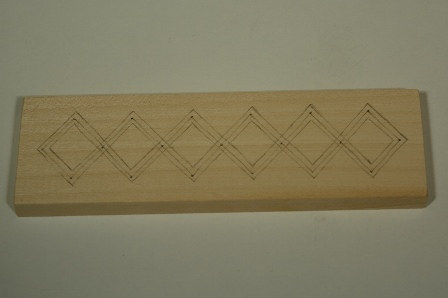 (Strip with the lines of the cuts drawn up) 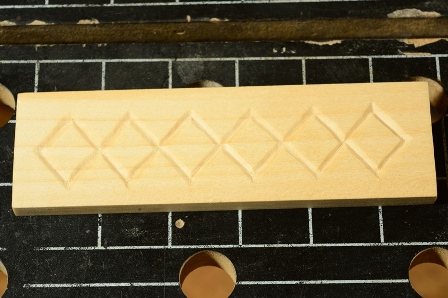 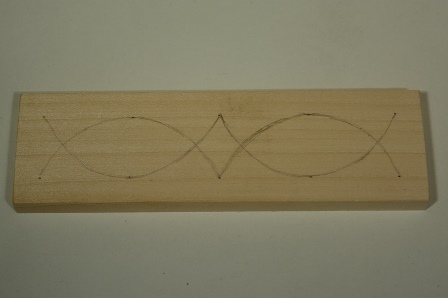 (Strip with only the central lines of the patterns drawn up) 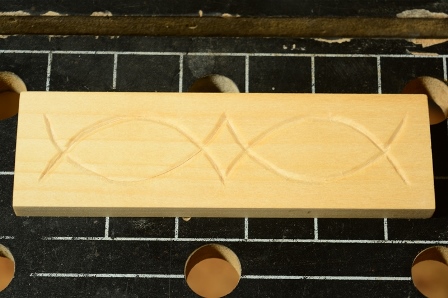 In the previous examples we worked with simple cuts. In what follows we will familiarise with the more complex triangle chip carving, which constitutes the basics of the decorative carving of convex surfaces, too. Triangle chip carving enables us to cut not only the motif from the wood but also the parts around the motif. Triangle chip carving must be performed by holding your knife at a 90 degree angle and cutting part of the side of the triangle from points (A)-(D) (see illustration below) towards tip (B) in a way making the cut increasingly shallow. Repeat the cut with a similar technique from points (A)-(D) towards (C). Finally, hold your knife in a narrower angle and cut out the piece with the knife guided from point (C) towards (B) in a way pressing the tip of the knife towards point (D). Reaching point (D), pull the tip of the knife back towards (B). If you have done it properly, the piece of wood will fall out without having to make extra cuts. This cutting technique is certainly suitable for cutting out not only straight-sided triangles but curving motifs as well. 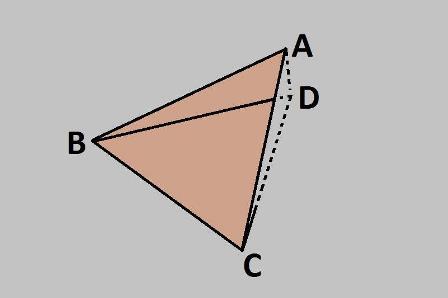 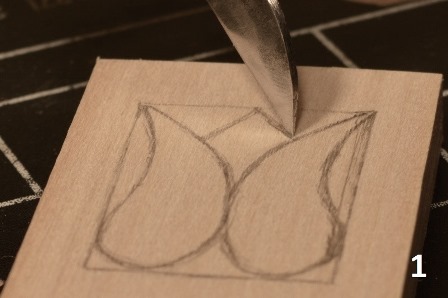 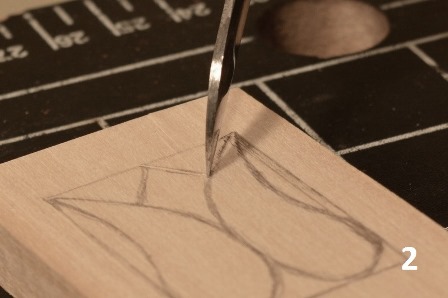 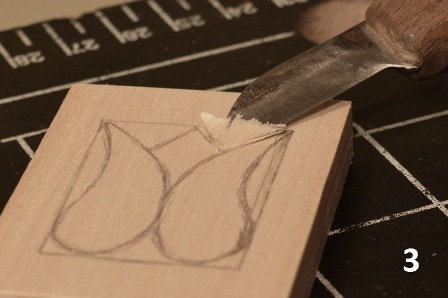 (The steps of triangle chip carving in three illustrations) 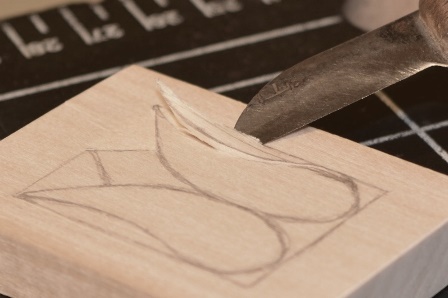 (Removing a part along the side of a tulip pattern) 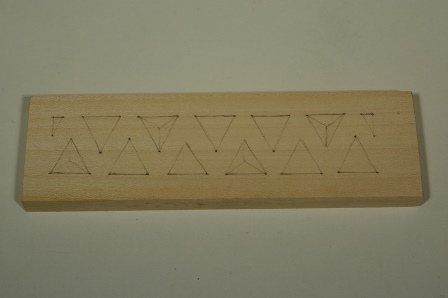 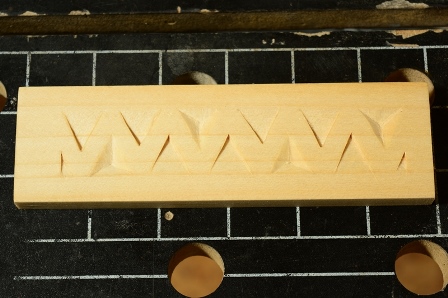 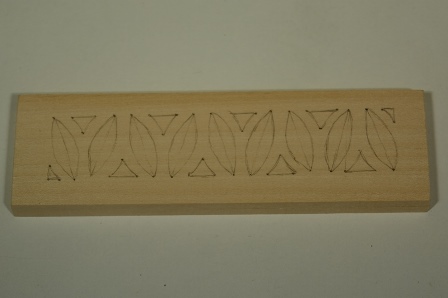 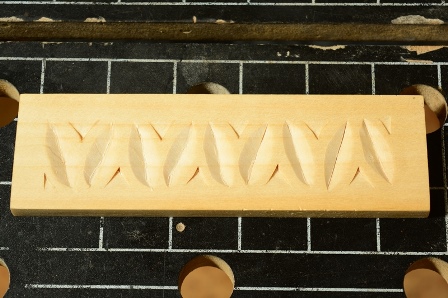 With more practice, you can start making more complex patterns, too. The required technique is called the decorative carving of convex surfaces. In the case of convex patterns, too, cut the contours first. After cutting, remove the part of the wood around the motif in a way similar to the triangle chip carving, holding your knife in a narrow angle. The motif left in the wood can be further rounded, its contours reinforced and its form shaped by chip carving. There is a vast tradition as regards patterns and motifs. Every motif has its special meaning. Being familiar with these meanings is valuable knowledge. If you grow fond of wood carving, it is worth learning about this system of symbols. In the case of carving convex surfaces, do not strive for symmetry any more: try to rather create a balance of motifs. Visit museums, exhibitions or consult books to find vast pools of patterns. Let yourself and your knife be inspired.